The voice commands for Android Music work when I'm in motion riding my bicycle.  The winds today are intermittant and soft from the E to W at about 5 - 7MPH.

I used a 19mm damaged nut socket on the connector bar between the suspension and stabilizer bar. With the breaker bar, the bolt snapped. So, I took the bicycle to O'Reilly Auto Parts in Painesville Township of Lake County and purchased replacements for both sides.

The new file moving app will place additional power demands on my smartphone as it queries a few of my music directories ever 15 minutes for new MP3 files and moves them to the main Audio directory on my external microSDXC card. I've been having a problem with Google Music. It will save to my external microSDXC card, but only to Google Music's directory. This app is too difficult to switch between songs, genres and albums when I'm driving, or otherwise in motion. The Android stock app does this better. But the stock app won't scan the Google directory and update the list of songs. So, I'm trying a new app that should detect them every 15 minutes and automatically move them.

If I am to try dieting while hiking, I need to run some controlled experiments first. Usually dieting is not recommended while hiking, but this is true for more rigorous trails like the Appalachian.  The Buckeye could be used for weight loss, I just have to find out how my caloric intake handles hiking 30 mile days.

I took the bicycle out for a two mile round trip to the convenience store and back.  The truing on the rear wheel and the USB generator worked.  It's like I'm 2 for 2 today and I'm surprised that they didn't give me any trouble. As per how much drag the generator has on the bike, it's hard to say right now and it needs to be tested on a longer route.

So far, it didn't interfere with shifting. With it attached to my Samsung Galaxy Note 3 with a 7.5" screen and having it jammed on, the generator produced enough power to keep the battery at the same level it began with.  However, the smartphone alerted me that it was only getting a slow charge. That usually happens when it's connected to a USB 2.0 port. The Note 3 is a 3.0 phone.  Oh well, sustaining the level is good enough for me.

The new kickstand is a bit tall, but I haven't tested it with a full load in the rear carrier, yet.

I purchased a Craftsman 10-PC. BOLT - OUT kit designed for impact wrenches online at Sears.com last night and picked it up in person at their store in Great Lakes Mall in Mentor of Lake County today.  I was hoping they were going to be for a 1/2 drive,  but apparently, they're 3/8ths.

The car is still on a jackstand and it's raining today, so I took LAKETRAN to and from the mall. 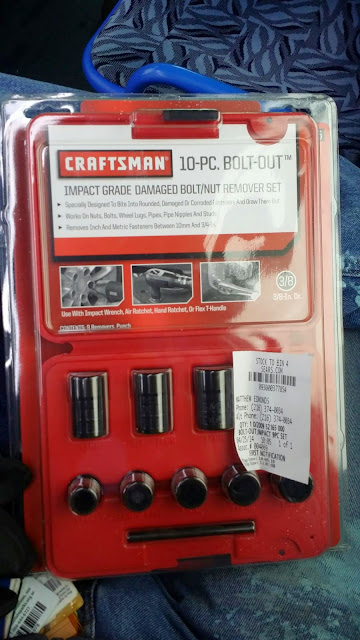 I finally learned how to true my own bicycle rim. With it in the truing stand as shown, I learned from YouTube that you turn the spoke nipple counter clockwise then turn the next one up opposite using 1/4th and 1/2 turns. I'm thinking about using 2 strips of metal that would be bolted to my kickstand's mounting bolt so I could true my rear rim on the fly. 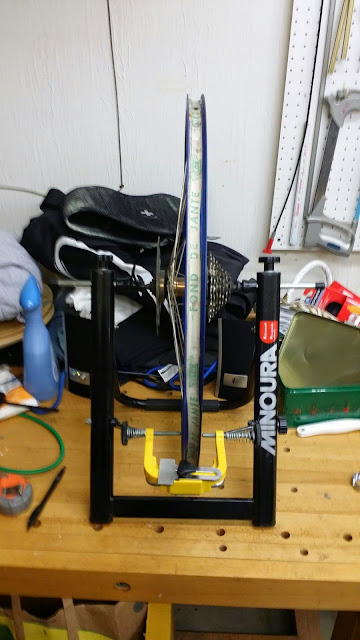 This is a test the adventure logs.

A new 3 socket cigarette lighter splitter was procured at Walmart of Medina in Medina County today. While I was there, I drove down Fenn Rd, had a look at some of the other amenity spurs and ascertained where the Medina Walmart stop actually was and took waypoints for them on my smartphone.

I also procured a new USB cigarette adapter at Speedway on W. 150th St. In Cleveland of Cuyahoga County.

The electrical problem with the right headlight occurs prior to the fuse block. That is something I hoped wasn't going to be.  With the millimeter positive probe in fuse #66's positive terminal, I've found that it was only reading 0.22V. I tested the other head light's #65 fuse and it read 11.88V... just like it should.

Im beginning to suspect that there's a bad ground somewhere. And the electric tailgate releases operation has been weak, too. 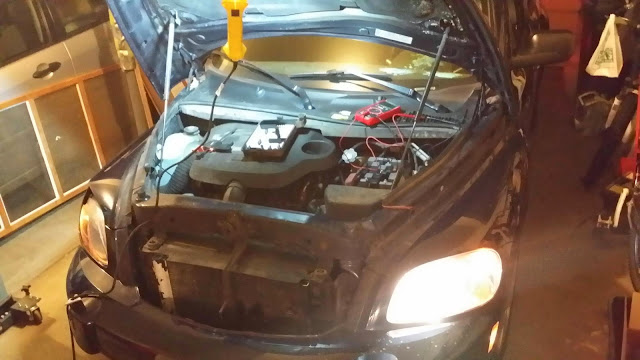 The wiring diagram for the turn signal switch which contains the headlight switch is in the Haynes Manual on page 12-25.

I received my two spare smartphone batteries via USPS today from Uniwide Wireless in Los Angeles, California. I'm pleased about its shipping time.  But, since the temperature at this hour is 26°F, I question USPS putting it in my outdoor mailbox. Any temperatures below 34°F can damage electronics. This type of product should be shipped requiring a signature on the receiving end.  But these minimum temperatures make me ask things like how do electronics survive being shipped at -60°F when the plane is traveling at 30,000 feet above sea level?  Or in a 53' trailer traveling through North Dakota in January? Is it too George Carlinist to use my brain? It must be...

I received my USB bicycle generator from Sorcingbay of Lexington, Kentucky this afternoon. But it was delivered between the front screen and main door of my temporary location and I found it with part of the side adhesive about 3/4 undone and the box inside looked like someone might have pryed a corner open? But after I took possession of it, there wasn't a materials or direction sheet. It's pretty simple anyways, so it looks like everything is here. And it came with a warranty card, which I'm pretty pleased about.

Other than that, I woke up this morning and found that it was about 50°F, raining and I still don't have a poncho.  Normally, this can wait, but since I intend to take this bike trip later this month, it might as well get procured now. So, I purchased a medium duty one at Dick's Sporting Goods in person in Mentor of Lake County also this afternoon.

It's good to run tests and put things on a shakedown cruise.  Just because the smartphone is new... that makes it an unknown. Here's another unknown... I have 6GB of data on it that I can download before I incur overage charges. When I lasted used a PCMCIA cellular expansion card in my previous laptop on Sprint, it took me downloading 29 seasons of television shows to rack up an $800 bill in a single month mostly overage charges.

Verizon doesn't have unlimited data packages, so that's why I pay for a additional 6GB package.  And they have several lower ones, too. I chose 6 because I was guessing what the phone and laptop would need down trail.   But since I wasn't paying attention last time, I really don't know how much it would take it get to, or exceed that 6? At the moment, I haven't even broken the 1GB mark yet, but judging by where I'm at now, I expect to do so at the end of this month...

But not 6. My cable Internet package here in the office is not measured in "gigabytes," or the total you can download, but in "gigabits," which is a measurement used to describe how wide the channel of information. And the amount of information one could download on those is usually unlimited.  With the smartphone,  that's not the case.
So a test needs to be done. I have a usage meter widget on my smartphone. And what I need to do is hotspot,  or wirelessly connect my three other computers to my smartphone's Internet for about a week or so to see what it would take to get to get close to maxing out.  And I'll do this at the end of the month and stop it about 0.3GB shy of the limit so the smartphone still has some of the package left to get by for a few days. Having this experience will allow me to know exactly what I can do it down trail when the hotspot becomes the primary Internet connection. And if I don't run an expirament like this, I could wind up in "hot water" simply by being ignorant.

My Samsung Note 3 drained about 60% of its battery in three hours on a 16mi cycling route. This is the first day that I've been able to test this unit under such conditions.

Ever since the last screen jammer malfunctioned on this device, I was going without one hoping that some of the apps would hold it on. But, it didn't, that messed up my data collection with my fitness app 3 times on route. So, I have another screen jammer and it appears to be working well.

At 133,975 miles on my 2008 Chevy HHR, I noticed that the USB cigarette lighter adapter was powering up and down while I was driving and the adapter and 3 port splitter's rocker switch was no longer lighting up. Furthermore, I don't remember turning it on to begin with.  So either it over heated, or took a surge? Either way, they need to be replaced this month if I leave for my 4 day cycling trip.

I took some tracks along the Valley Bridle Trail in the Everett area in the Cuyahoga Valley National Park. Two days ago, I was tracing some trail on Google Earth for an amenity spur on the Ohio Transit Hiker's Resource - 2014 Edition. And the application was giving me some conflicting readings.  I've noted in the past that the NP doesn't always upload every one of their trails to Google.  And I think I saw something that I could use in the imagry,  but I didn't realky know what it was. So, I went down there today to find out just that. Some times, you can't do it all from behind the desk.

For instance... there's a new map update for the Old Man's Cave Section in South Central Ohio.  Because some of it takes place on an off-road bridle path in a heavily forested area (impossible to determine a trail's course in places like this from the desk), unless the BTA updates it's tracks, I won't have any new data until I'm there to get it myself.

Work on OTHR's guide is progressing.  I only have the Akron, Road Fork & Whipple Section's left to do. The latter two are easy, they're just I'm putting the information on the county lines. The Akron Section. .. I'm about a 1/3rd through inputting it's information, but I needed to stop to get that GPX data today in the NP and in person.