I attempted to groom Whipple Section, Pts. 06 - 05 (10/2010 map), but I forgot my gloves. There was some storm damage out there, so I aborted the task. Right now, I have a fuel shortage and won't be able to get back out three until next Sunday at best.

It's been a little while since I logged last.  I live in the Western Hills neighborhood in Marietta of Washington County.  I rent a room in a house on a high hill that has a stellar view of Marietta's north side.  You might call this place "Upper Harmar." You might think that it's just a $20 folding camp chair.  But when I'm on the back porch, it feels more like a throne.  Other than that, there's a bunch of things that I'm trying to do to the place.  Right now, I'm making progress on a mouse problem.

I have a bathtub drain where the water will not go down.  Right now, I'm thinking about getting the Roto Router in here.

The garage is one car and has a lawn tractor in it.  It doesn't have any exterior door controls and the garage door opener doesn't work.  So, my car is parked outside with it's manual transmission in gear, the parking brake on full and chalks deployed because of the driveway's grade.  If the car were ever to roll, it will punch though an attached garage at the neighbors house across the street.

I'm waiting until the 1st of the month to get my Electronic Control Module looked at.  The technician at Sears this past month was able to crimp the broken wires that led to the Cylinder 1 spark plug mount.  They were cut by a bar that once mounted the air filter manifold to the engine block.  Once upon a time, the bar above the mounting hole snapped, leaving a rough, but sharp and perpendicular edge.  They were cut by the bouncing of the air filter manifold as I was driving.

I then had an engine misfire somewhere just before Marietta.  I stopped at Speedway to get some gas and selected the 87 octane. It didn't have a light on at the bottom the selector, but it worked and I gave it a full tank.  Well, when I pulled out of there, the misfire started happening and I was experiencing reduced power.  And I thought, "oh my gosh, Speedway gave me bad gas!!!"

But that wasn't true.

This month has not been good with the weather forecasts.  I've had 2 straight of the last 3 weeks of lightning forecasted for the Marietta area.  It didn't happen as much as they forecasted, but that's hind sight.  Nothing scares me more than being caught in a lightning storm on the trail.  There's nowhere to take shelter out there.  And there hasn't been a chance to blaze at all this month.  I'm really hoping the weather is going to break soon.

I saw Powerade at $0.80 per 32oz bottle at Super Walmart in Marietta of Washington County.  This is the second time that I've seen Walmart sell this at this price.

On Whipple Section, the Community Action Bus Lines (CABL) can be boarded and disembarked:

-2.7 miles from the trail at Archers Fork Rd/ C14 & OH-07 in Independence Township of Washington County on Thursday mornings only

-2.7 miles from the trail at the Social Security Administration on Green Street/ OH-26 with weekday services on a regular route.

- 1/2 mile N of the Trail at a shelter on Main Street in Macksburg of Washington County on Thursday mornings only.

There are no transit services on holidays or weekends.

Transit services to Parkersburg can be done on CABL's "Belpre Route" at limited times on Fridays only.  Otherwise, Marietta and Parkersburg both have stops on the GoBus & Lakefront Lines, who are both Greyhound affiliates in their network.  Lakefront connects Cleveland of Cuyahoga County to Charleston, West Virginia.  The GoBus connects to Athens, which has transfers to Cincinnati and Columbus.  While their fares are higher, these bus lines could be used to get between Marietta and Parkersburg and essentially link the two public transit systems together.  This could be an advantage when searching for a replacement piece of gear that was broken up trail.
Posted by MD Edmonds No comments:

I told a clerk at the Blennerhasset Hotel that some of the Whipple Section - Buckeye Trail (North Country Trail) do have a taste for upscale lodging and that im aware that day hikers have lodged there in the past with it being in Downtown Parkersburg and 18.2 miles away.

Whipple Section is one of 26 on the 1,440mi Buckeye Trail and one of 19 that carries the 4,500mi North Country National Scenic Trail. It's off-road trail is routed through the Marietta Unit of the Wayne National Forest on a dirt surface. After the snow melts, it can get muddy out there.

The on-road links the Marietta Unit to the AEP Recreation Lands in eastern Morgan County by way of Macksburg of Washington County on lesser used township and County roads. After winter, some of these can get torn up by 4x4 vehicles.

For those of you who are using lodging amenities when hiking the Whipple Section, I recommend that you keep an old cotton men's undershirt that you can submerge in any water (perhaps from a steam) and wipe off your muddy boots with it.

But at Blennerhasset, I made the suggestion that they might want to look into getting a boot bristle. On the 6,800mi American Discovery Trail (which passes through Parkersburg), those hikers will probably reach the hotel on foot, having been on pavement, or local bike trails for miles. So unless they drive in from the Chesterhill of Morgan County (where its on road) or Veto Lake/ Vincent area, it's likely that ADT hikers will probably just knock off their boots enroute, where BT/NCT hikers might go straight from the dirt surface to the car. 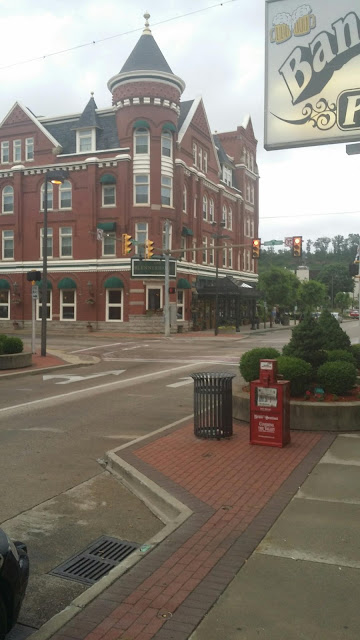 Whipple Section - Buckeye/ North Country Trail's mainline was completely free of obstructions today with 4 members of the sawyer crew present and myself.

My next stop is Lane Farm, hopefully tomorrow. My 2008 Chevy HHR has a misfire in cylinder 1. I have the spark plug to change it, but the bolt which holds the wire on is stripped. I probably have the stripped nut socket to get it out, but not a replacement for the bolt. That will have to be a dealership item, but I doubt that they'll have to be a big one to stock it. Changing the spark plug is just one of the possibilities.

The Blennerhassett Hotel at 320 Market Street is in downtown Parkersburg, West Virginia.  It's about 3 blocks east of the American Discovery Trail - West Virginia and the Belpre - Parkersburg Bridge and 18.2 miles (walking distance) away from Whipple Section - Buckeye (North Country Trail Connector concurrent).  This hotel provides robes, has a special by-pass safety dial for shower water over 100F.  It also has dry cleaning service, a restaurant, valet and a parking lot across a nearby alley.  This is probably one of the more luxurious places to stay near The Wilderness Loop (Road Fork, Whipple, parts of the Belle Valley and Whipple Sections).  Not to mention that the staff's been very attentive and I've heard of others having a good stay here as well.

As Whipple Section's Supervisor, I thought I'd write a log for this establishment.  I know that there's hikers out there that like staying in more upscale lodging establishments. If you stay here and you have dirty boots (while I haven't heard of any such requirements), you might want to wipe them off with something like a water soaked spare t-shirt as a courtesy so you don't get the floors dirty when you come in from hiking in The Wayne.  I came in with my trail maintenance attire, which is pretty raggity, but out of place in my opinion.  I probably should had came in the front door in something nicer, but the staff didn't give me a problem with it.  However, I wouldn't recommend wearing the wet shirt that you might use to clean off your dirty boots.  As soon as I walked in the door, there was the restaurant in the next section.  And the men were wearing a casual button up shirt and pants that evening.
Posted by MD Edmonds No comments:

I took my Chevy HHR to Sears Automotive in Parkersburg, West Virginia to diagnose and repair the engine misfire in my 2008 Chevy HHR LS with the 2.2L engine. What happened is my air filter manifold support rail was unmounted on one side and broke off on the other. The broke side cut the wires for cylinder #1. The good news is that they replaced the rail, patched you the wiring and I got my 1st cylinder back. The bad news is that it probably fouled up the #1 spark plug and it needs and it needs a new electronic control module. Sears Automotive doesn't really have the equipment for that, so they referred me to some specialists who can reset that computer.