I spent the day sewing trail patches on my straw cowboy hat. And I repaired a tear in one of my pair of jeans and put a replacement button on another.  Right now, the weather report for tomorrow (Monday 04/20/2020) is showing 5 hours of favorable skies for geo photo cataloging the Road Fork Section, Points 26 - 25 (07/2011 BTA map) round trip.  It's not as far as I'd like to go, but I can't just stop in the middle of a segment.  They have to be photographed whole.  But Wednesday is looking like I'll get another 5 hours, but  on the Whipple Section?  Points 03-W to 05 (10/2010 BTA map) have priority there.  I need to see it anyways because I have yet to give it an unofficial, but special segment name.

The purpose of the catalog right now is volunteer procurement.  As far as getting new trail adopters, group activities are suspended until further notice.  We can get new trail adopters (our primary volunteer maintenance crew), but can't give them the necessary in-person indoctrination until COVID-19 restrictions are relaxed.  To sum it up, we can still get them on the record, but not working yet.  Anyways, we need those photos for an Adventurer's Project volunteer procurement/ trail promotion campaign that should be had sometime after the COVID-19 restrictions are lifted to a more favorable point.

I didn't jump on the bandwagon and advocate the use of the trail in our region because I thought it would precipitate a public health problem.  When cataloged Whipple 06 - 05, it was it's usual, tranquil self out there.  The nearest person was 150 yards away from me and they were across a river on a dirt bike.

Our photos for Road Fork 27 - 29 are done and that accounts for the popular Archer's Fork Loop concurrency where I think people are going to be?  I've got a good lead on an adopter for Whipple 01 - 02.

New adopters or not, I want to upgrade all of Whipple's off-road blazes myself.  It's just to get them up to the Maintenance Guide's recommended standards.

It might be 9 days before I can continue Adventurer's Project's "Geo Photo Catalog."  It has several applications.

Application #1: A photographic record of the trail to educate Buckeye Trail Association volunteers and a reference for future maintenance needs.

Application #3: Social media content.  The photos will be released about 3 at a time in between other posts and help with fresh content during the cold days.

Application #6: Determine where we need to take pictures with better cameras.  Those photos can be used for trail promotion, the website and social media.

Adventurer's Project supports the Road Fork and Whipple Sections of the Buckeye Trail (North Country concurrent) in Noble, Monroe, Washington and Morgan Counties of Ohio.  The photos are taken about every 50yds or less in both directions.  Currently, the photos are being taken at my smartphone's highest possible quality.  As this region's off-road total is about 40 miles, it should produce over 2,600 photos.  That's far more than Buckeye and North Country's hikers have produced at the moment.

On-road portions have been recorded via video with spoken locations from an automobile.  Aside from that, Google Street View covers some of this area.  So at this point, it's mostly about photographing about 40 miles of off-road paths on foot.  And I'm earning my 2020 North Country Trail 100 Mile Challenge, which I've missed other challenges like this in previous years.

The "geo" part pertains to enabling my smartphone camera's "locator" to produce geotags.  This process embeds the location of where the photo was taken into the properties of the file.  From there, software can be used to extract their coordinates and then embed them into placemarks into a Google KML/ KMZ file.  In terms of the maintenance record, volunteer users can follow the photos, particularly with the GIS/ GPS track of the Road Fork and Whipple Sections.  So, this is to see the trail's line with the photos on an application like Google Earth and probably ArcGIS products? 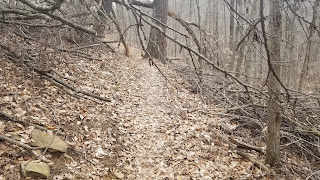 In previous years, the camera locator was on by default.  But I like to refer to geotags as "creeper tags."  It's unfortunate because people were physically followed by others when they downloaded their pictures and had the geotags extracted.  They could tell by the days of the week when they took their kids to karate class for instance.

But recently, to enable the geotag feature, there are two safeties.  One is that the phone's locator must be enabled.  When it is, this is what enables the smartphone's mapping and navigation.  The second step is to enable the locator a second time, but in the camera app's settings.  I find it to be a wonderful tool for the trail, but I tend to use it wisely.  As of the time of this post, geotags are automatically stripped by Facebook, but not by every social media company.  Presently, Adventurer's Project is only on Facebook and no other social media service due to insufficient manpower to admin more.

At last count, it takes about 1 hour to photograph 2 miles of off-road footpath here in what I call "Far SE Ohio," which is in the Appalachian Foothills.  That's that's about 4 times faster than it takes to initially blaze (painted navigational markers) one.  But still, the "stop and go" is harder on my body and I haven't scheduled this photographing over 7 round trip miles yet.

So, that just about sums up Adventurer's Project's Geo Photo Catalog. 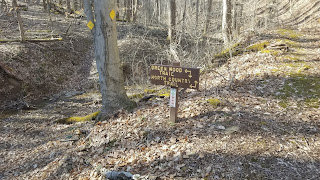 With the Whipple Section - Buckeye Trail (North Country National Scenic concurrent) re-reinstatement of the proper blaze count in the Marietta Unit of the Wayne National Forest (The Wayne), I should only fill in the missing ones and leave the rest for potential trail adoption.
Posted by MD Edmonds No comments: