I didn't disconnect the battery last night.  And the digital odometer was mostly malfunctioning for the better part of the first half of today's doings.  That somehow leads me to believe that it's short is located in the vicinity of of the air filter manifold.  I had to wiggle it about last night when I changed the air filter.

Today, I went from Woodsfield, Ohio to New Martinsville, West Virginia to go to the auto parts store and Walmart.  I was hoping to get a Bluetooth boombox, but, WOW, they're expensive.  Walmart was selling them for over $300.  I could get a fold out head unit and the GM adapter kit for less than that.

After that, I determined that I needed to get the gas tank empty to pour in some fuel injector cleaner.  So, I drove to Middlebourne, WV... Then I drove to Avrilla,, to Ben's Run.. to Parkersburg, WV.  At which point, the tank wasn't going down enough, so I drove to Chesterhill, then Stockport and then Beverly, Ohio.  I replaced the low and high beam headlights in Stockport today.  Then I filled up and added the fuel injector cleaner in Beverly.

I thinking that I should test every fuse and relay that I can find just because it's simple and it should have been done for a new acquisition as a matter of standard procedure.

I just acquired a 1990 Buick Riviera yesterday.  I changed the oil, oil filter and air filter at the mileage shown.  The engine holds 4 quarts of oil.  It currently has 3 quarts of 5W-30 and then 1 quart of Lucas Oil Stabilizer.  Also, about 60 miles prior to the mileage shown, I had 4 new tires installed at the Auto Care Center at Walmart in Marietta, Ohio. 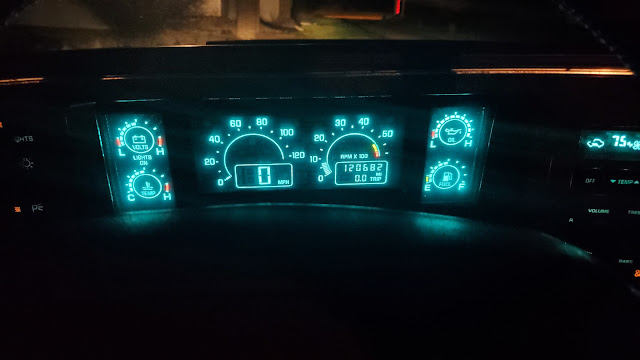 However, just as I was going to drive it after the oil change to work the Lucas through the system, I discovered that my passenger's side headlamp was burned out.  At that time, my local auto parts store was closed and I have to wait until after dawn to work it in and get the headlamp.
Posted by MD Edmonds No comments:

I filled my 1987 Chevy G20 Sportvan with antifreeze today.  When I turned it on, I sounded better than it ever has before.  The so called "smoke" that I was seeing was coming from the new exhaust wrap that I did.  Apparently, it hasn't completely bonded?  My aftermarket water temperature gauge doesn't work and my aftermarket tachometer is malfunctioning.  Either one of those could be from the gauge power wires being attached to the turn signal.  When the turn signal is activated, it produces a surge in the gauges.  I have the replacements sitting in the basement right now.

What's troubling is that my radiator has only taken about 8 quarts of coolant where it should take 18.

I'm All Over the Place

I have the van's battery charging and I don't know how long it's going to take?  Recently, I got a shipment of loose leaf Earl Grey Tea with extra bergamot.  It's the second time that I ordered from Upton Teas.  This time, I got so much that the package was twice the capacity of this Teavana container that I have.  I keep it around because it's a gold cylinder with a red dragon.  One time, I got my loose leaf tea refilled in this canister at some place in Lakewood, Ohio.  And the guy looked at it and found out that the container was from Teavana and I was so embarrassed.  But it was a good tea place and I recommend their Downtown Cleveland location for my people back home in Painesville.

The matter of the upcoming The Wilderness Chapter goes before the Buckeye Trail Association's board in 40 days.  I have a presentation on Adventurer's Project's capabilities due in about a week.

So, I'm going out to check on this battery in about a minute and I'm contemplating what my body will look like when I loose all this weight?  I'd have to loose a lot, but I'm pondering a metrosexual look with having a slight build.  I called it "Honda material."

This log is probably going to skip around.  I just checked the battery in the van.  It's not charged yet.  I set my countdown timer to another hour.  My radiator just took 6 quarts on the first refill.  Apparently, it has an 18 quart capacity?  I just need to start the engine to get the thermostat to open so that it will suck the coolant into the engine block.  But there is a good chance that the engine is damaged?  I'm trying to get to the point of knowing that for sure?

Adventurer's Project didn't have assets, but I do have a head start on some items that other BTA chapters never started out with.  And that's what I have to go over with the crew.  Adventurer's Project was a crude attempt at emulating the BTA's chapter functions.  I think our setup is crude as well and it will need more investment?

I vaguely remember a time when I went to The Armory in Marietta and spoke to an employee once and then the director on another day?

I just checked the van again.  The battery charger still reads the same 90% charge that it started out with 2 hours ago.  I just reset and restarted my 1 hour time again.  In the meantime, I've been washing and drying my laundry.  It seems like I've been doing a real good job at that.

The RAM in The Robot is probably bad?  At this point, I have no idea when I'm going to replace those chips?  It's motherboard is so old that I'll probably max them out and get the highest quality ones that I can?  I've been saving up pretty hard for another automobile.  The next thing that I'll have to do is get the basement floor sealed and then get enough decorative gravel to put around the house to direct rain water away from the foundation.  I have a local guy who can haul up to 5 tons of that kind of stuff.  That's one of the benefits of living in Southeast Ohio.  I don't know so many dump truck guys up north where I'm originally from.

There have been times during the COVID-19 (Coronavirus) Pandemic where I felt like Woodsfield was driving me crazy.  I felt like people's materialism and conformity was bearing down on me.  I, on the other hand, have been feeling like I'm going to loose my marbles?  I was getting a sandwich at Subway two days ago.  It was a wrap.  And the woman working there asked if I wanted it cut in half and I said yes.  Then I asked if she could write me a note??? because my mom use to cut my sandwich in half and write me a note.  I put those together neuron firing quick.

My automotive battery charger is small.  The most that it charges at is 8 amps.  The van has been down for a while, but I took the negative cable off of the battery.  When I tried to start the van 3 hours ago, the starter clicked, but didn't fully activate.

Well, I have to get my workout in now.

I just replaced the water pump, belt tensioner, serpentine belt and both radiator hoses at 148,431.6 miles on the odometer of my 1987 Chevrolet G20 Sportvan. 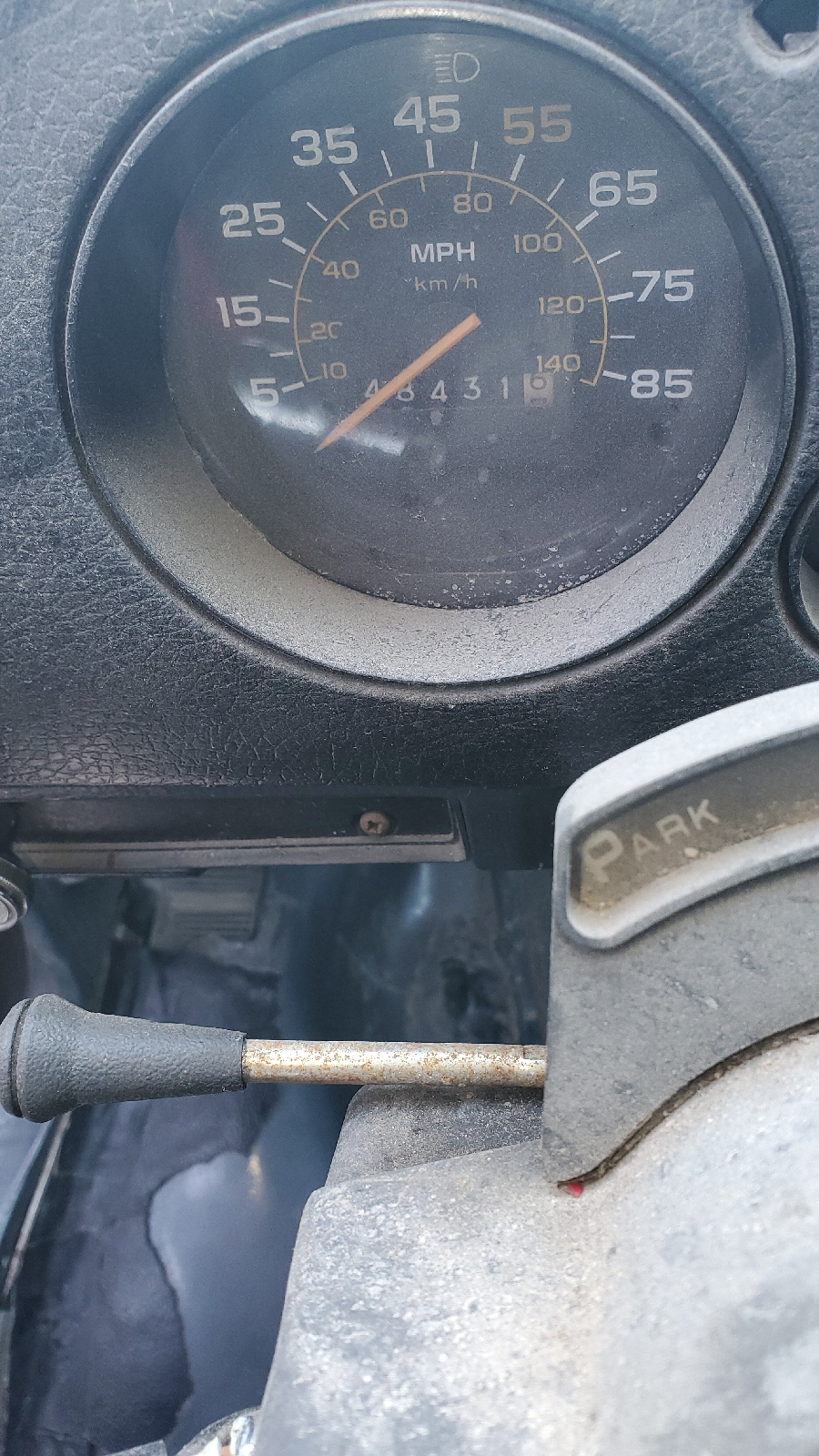