I submitted a TXT file to the Buckeye Trail Association's Facebook group regarding Townships, villages and cities that are on the route of the circuit.  Much of the data was compiled using county maps that displayed townships and incorporated areas on the Wikipedia page for each county.  Those images were overlaid and resized to fit the county boundaries on Google Earth.

This project was completed because the OTHR's cost analysis relies on property ownership data in Putnam, Paulding and Defiance Counties that is unknown.  In order to get that information, I'll have to consult with the county engineer offices to make that determination.  Right now, as far as I can tell, nobody in the BTA is sure about where on the Miami & Erie Canal Heel & Towpath trailside camping is permitted?  And that's because Buckeye has the right to pass on some portions that the state doesn't have ownership of.  Where it doesn't, camping is up to the owner.

In these areas, if the hiker can not trailside camp, then there may not be any other commercial amenities in range.  And this is an area of the circuit that is without transit, probably it's biggest gap.  I predict that there will opportunities to trailside camp within OTHR's 24.9mi limit for distance hikers.  But right now, camping on this heel/ towpath outside of the designated limits for the Miami & Erie State Trail was brought up on Facebook over a year ago and there still isn't any resolution on it.  And that's probably because nobody's had the time to drive out there and consult those public records yet.  Looks like I'll be the first.

I drove my car down to the Cuyahoga National Forest today to acquire a free map at Happy Days Camp.  On my way back, I stopped at a local gas station and just before I got out of the car, the emergency sound played on my smartphone Weatherbug Elite app, alerting me that I was in an area declared to be in a tornado warning.  The gas station clerks quickly shut down the station and reluctantly, I had to drive another 3 miles in to the nearby City of Hudson.  I stopped at a local McDonald's to prepare to take shelter.

The point that I want to make is that I was rather impressed with the way that app worked under the circumstances.  My AM/FM head unit wasn't on at the time.  Also, I got emergency text alerts from Verizon Wireless as well.  Weatherbug played the emergency weather sound again when the app changed over to another county.  That's something that the text alerts didn't do, but they probably work on a much wider area, whereas, the app goes from the nearest weather station to the next one based on my GPS position.

They are probably more frequent, but I'm not sure if that makes the text alerts inferior?  Right now, I'm going to reserve judgment on that.  Weatherbug is inferior to the text in the way that I won't get its updates if I don't have any data signal.  But the texts will come in if I have so much as one unstable bar of roaming.  As for today, it's good to see this get a test.  It wasn't even on my list of things to experiment with and I'm glad it happened.

My back sprain continues to become more minor
Posted by MD Edmonds No comments:

I'm still learning how to use my "Keep Screen On Free" app on my smartphone that I downloaded from the Google Play store for Android.  It has a selectable feature that allows me to keep the screen jammed on until I turn it off (with the power button). Well, I've been having problems as the screen has been shutting off while I thought the jammer was engaged. But I think the problem is on its "OK" button.  It's there to confirm the setting and have it take effect, like an "Apply" button on an IBM Based PC.

What's confusing is that this is an Android smartphone and with other apps, this isn't done anywhere else.

Two new rear struts were installed on my 2008 Chevy HHR LS. But, they didn't need to be replaced. So, I saved the old ones in case I need them in the future.  But the procedure to get the springs off required dismantling two brake lines and I don't know enough yet about bleeding the brakes to attempt that at the moment. Right now, I plan on adding the springs to my mechanic's list of things to do.

The new passenger's side eye was mounted. But due to my prior collision, the beam is way too low. So,  I know that I need a new eye, too.

The passenger's front side strut and shock was installed.  But, I forgot to remove and install the driver's side unit.

The mileage on the dashboard was 134,304 miles when I finished and bolted everything up. Then I took it for a drive.

The car tends to hold the road straighter by itself now. And the ride is quieter.  But pictured here is my aftermarket roof rack. I've never had it mounted so far forward before. Well, I got on the interstate and it started whistling right around 65MPH. So, I got off at a rest stop and cranked it's steps down more, got on the interstate and it started whistling again.  When I got back to home port and looked at it, it showed signs that the wind shear was going between the car and the cage. And the mounting struts looked like it was trying rip the cage right off the car. If it was further back, it wouldn't make this noise.

At the moment, there didn't appear to any noticeable drop in fuel economy, which I found to be odd. 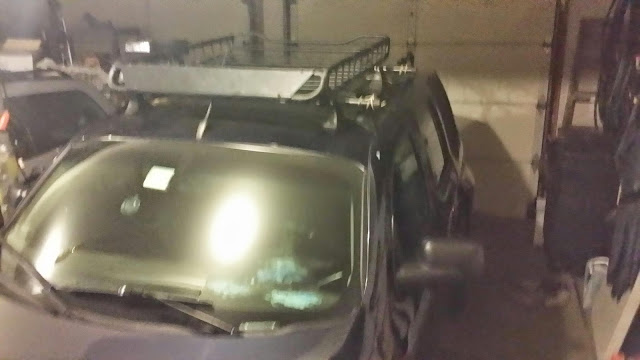 This is the second day that I've flared up a tendon in my right bicept while working on the car.  This time, I'm unable to ignore it.
Posted by MD Edmonds No comments:

My data usage with Verizon Wireless reset this morning.

Pictured here is one bolt and nuts that was snapped off one of the stabilizer bar link mounts. With the 17mm damaged nut socket freed of the previous bolt and nut, I just snapped this one off like I did the last.

The passenger's side strut/ shock mount installation was completed yesterday.  Everything went back together as it should.  The new headlamp harness was hard wired in and it works. But I noticed when working with the new eagle eye, that there was more damage to the outer hull than I previously estimated.  It looks like it will need an eye socket replacement.  The good news is that it's still a part of the outer hull. And there isn't any damage to the HHR's inner hull, or frame. 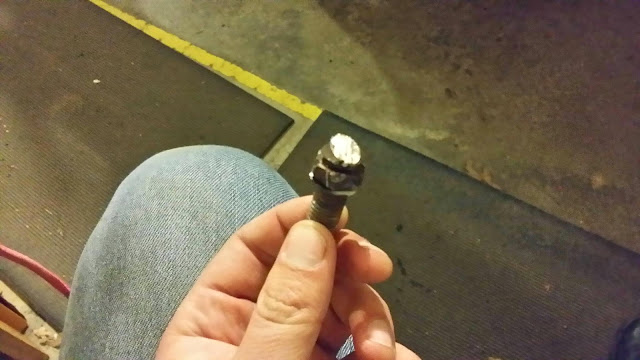 The last week has been eventful.  I torqued off a bolt on the passenger's side stabilizer bar link with a 18mm wrench, breaker bar and 17mm damaged nut socket.  When I did the first one, I snapped the bolt and nut flesh against the stabilizer bar mount.  When that happened, the socket cut into the corroded nut and ceased inside, making its removal seem impossible.  Even a long screw driver and hammer wouldn't get it out.

So, I took to drilling it and smoked the bit.  That barely took 1mm off the surface of it.  For the next one, I resorted to using the sawzall.  But either my speed was too high, or the blades I was using just weren't meant to cut through metal that dense?

Well, I bought a tool from Sears in Mentor of Lake County that popped that nut and bolt right out of the damaged nut socket.  So if it keeps this up, I'll just twist and snap those other three bolts.  That's fine with me.

This is how I see the rest of this suspension upgrade and light harness replacement going... The light harness is going to crimp on after I cut the old one out. The new eagle eye will bolt in, I know where one of them is at and have to find the other.  Tomorrow, I'll torque off the second bolt for the passenger's side stabilizer bar link.  Once that's out of the way, the new link can go on and the passenger's side strut

The headphones that I got stock with my Samsung Note 3 smartphone started shocking me in the ear canal one day.  So, I purchased a new pair of Sony Stereo Headset DR-EX12iP for about $28 from Walmart in Mentor of Lake County today.  And I really like the way they sound.  I put down more money than usual on earphones because sometimes you can buy some that sound like your state of the art smartphone MP3 is an AM radio.  Anyways, I needed mine to have a built in microphone for when I make, or receive calls.  But Sony's built in volume control doesn't work with my Android device.

Yesterday, I dropped my Note 3 in a toilet full of feces while I was out shopping.  When I pulled it out, the back light came on and it seemed that it still worked.  So, I took it apart and washed it down with soap and small amounts of water. Put it back together and purchased some 91% isopropyl alcohol.  Where I got back to the place that I'm house sitting, took it back apart and rubbed it down with Q-Tips.  Then I put it all back together and realized that it didn't work anymore.

A couple hours later, I called Verizon asking what my options where and the operator put me through to my insurance provider, Asurion. I can't say for sure, but I've probably had insurance on my smartphones ever since 2009.  And Asurion has never been a bad company to deal with.  But this time they impressed me.  I order a lot of things on line and 5 - 7 days with shipping is fine with me.  But for my $99 deductible that I had to pay, they overnighted my replacement Note 3 to my doorstep, which I thought was very fast. It exceeded my expectations. The damaged phone will leave Lake County tomorrow via USPS.

I spend much of today programming the new Note 3 so that the apps and screens looked something like it's predecessor.

The bicycle now has a USB 3.0 cable attached to the generator.  I tested it for about a mile today and the warning that usually comes up when I plug a USB 2.0 cable into it stating that it's charging slowly no longer comes up.

In the past few days, I submitted KML data to the Buckeye Trail's Facebook Group Files on parking areas along The Emerald Necklace (Cleveland), Ohio & Erie Canal and Ohio to Erie Trails.
Posted by MD Edmonds No comments: